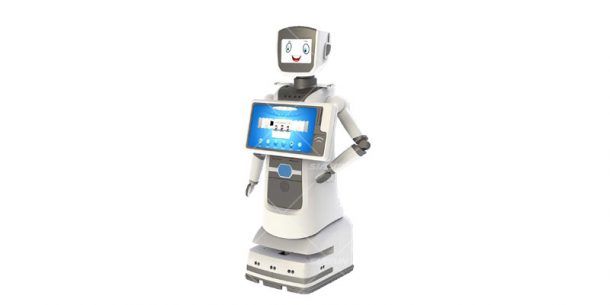 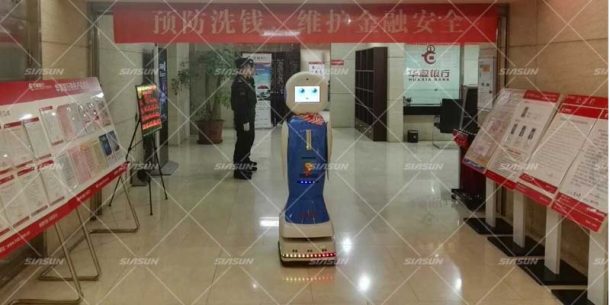 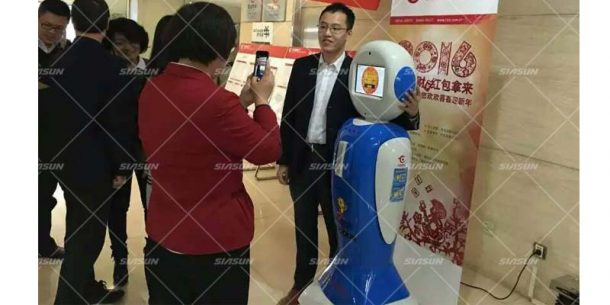 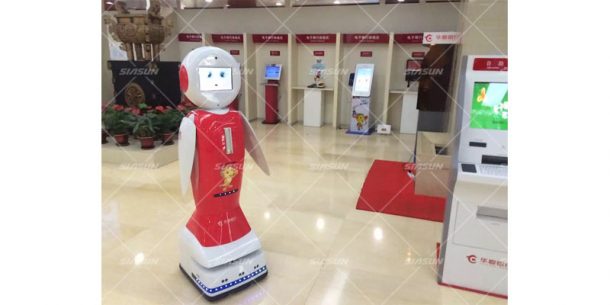 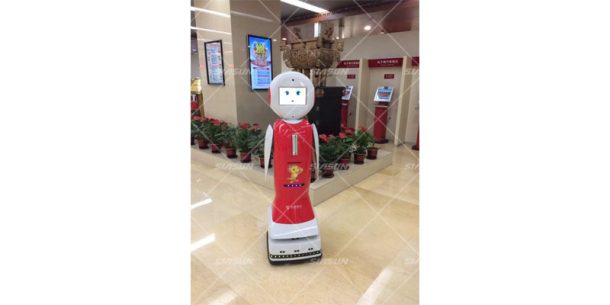 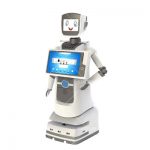 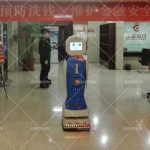 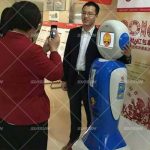 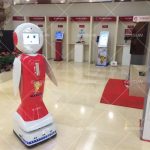 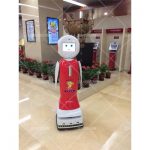 SIASUN Sunbot-II has not only elegant appearance, but also more intelligent in human-computer interaction area. Sunbot-II is provided with several high-technology functions, for example, Autonomous Navigation, Autonomous Obstacle, Autonomous Charging, and etc. Sunbot-II can be used in all kinds of lobby. In the result of face detect function, Sunbot-II is qualified as the greeting job. Sunbot-II can help with arena presentation, product advertisement propaganda, line up customer, as well as goods deliver.

Based on the advanced SLAM technology, SIASUN Sunbot-II can sense different environment and create map model by itself. In this method, robot can move autonomously in the assigned path or roam in the map.

SIASUN Sunbot-II can detect the obstacle in advance during autonomous navigation. Robot can alter the assigned path and make a detour in order to avoid the collision. Robot can move smooth and be more intelligent.

When battery is low, SIASUN Sunbot-II can go back to the charging station autonomously. After charging, robot can continue working till the battery dead. User can adjust the battery charging parameter by the actual situation of usage, in which, the charging time could be more flexible.

SIASUN Sunbot-II can make conversion with people. It can play several roles in daily life, such as, Enterprise Introduction and Propaganda, Greeting Guest, Presentation about the Exhibition Stands, and etc.

SIASUN Sunbot-II has a function of Face Detect. When people get close to the robot, Then robot can make different actions by adjusting the distance between people and robot by using the front camera. When robot is executing the guide function, robot can adjust the leading speed by triggering the back camera. Robot can slow down, speed up or stay on the spot by confirming the distance between people and robot. Robot can alert people to follow up by voice or changing the expression.

SIASUN Sunbot-II is equipped with a high performance touch screen. According to the information on the screen, robot can interacts with users. There is amount of interaction in the standard interface, while user can customize particular function based on their demand.

SIASUN Sunbot-II is equipped with a high performance touch screen. User can import enterprise propaganda, product induction, event release and etc into robot UI interface. By using roam function, all the information in the UI interface is delivered to people.

SIASUN Sunbot-II is equipped with different sensor,  (such as laser, sonar, obstacle avoidance and etc, ) in order to detect the environment Omni-directionally. This methods can ensure both people and robot’s safety while robot is moving.

1.       SIASUN Sunbot-II provides fashion appearance, thus, it can promote enterprise’s brand influence. SIASUN Sunbot-II can be the perfect match to show the high-technology and intelligent of your company.

2.       Because of the advanced SLAM algorithm, there is no need to put magnetic strip on the floor. SIASUN Sunbot-II can move and avoid obstacle autonomously without rebuilding the lobby.

3.       SIASUN Sunbot-II can works in all kinds of environment and substitute people to the repetition job such as greeting, leading, and explaining job. With SIASUN Sunbot-II, user could provide high quality services as well as decrease labor force.